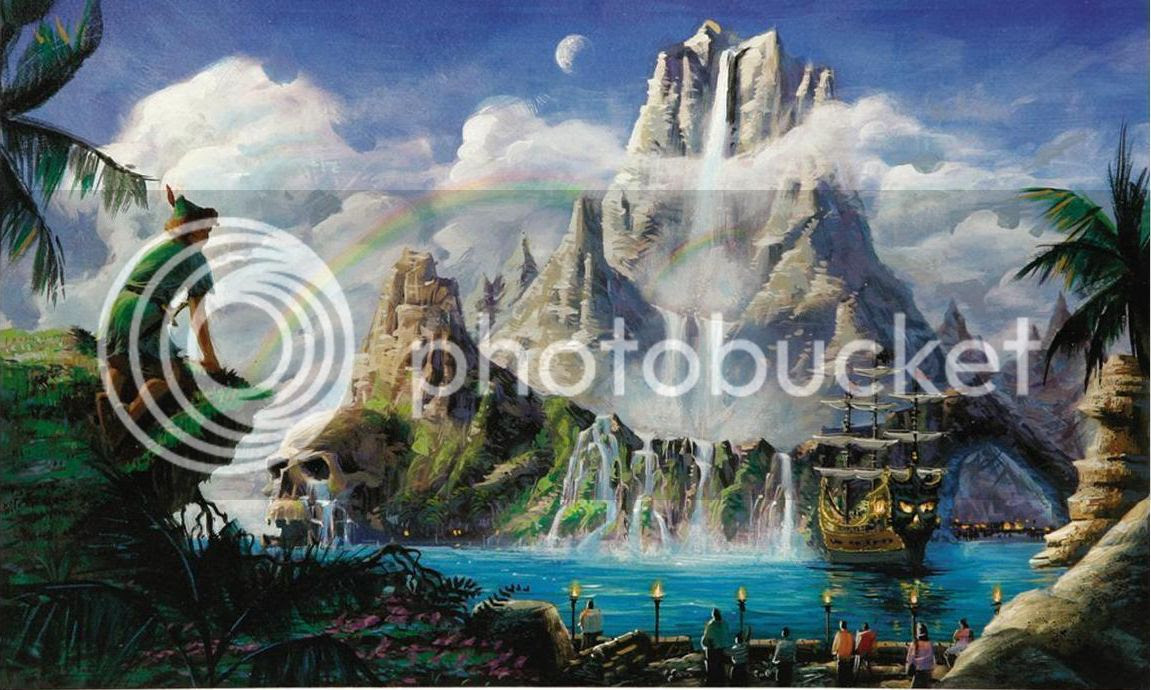 Unless you live on another planet, you probably know that last week was another "Michael Jackson week". The "This Is it" documentary and CD album were released and a major Michael Jackson exhibition opened last Tuesday in London. I thought it would be the perfect time to introduce to you one of Michael's most secret - and really fantastic - projects: the Peter Pan's Neverland theme park that never was.

Let's first go back in time to 1997, when Michael Jackson and Prince Al-Waleed - Disneyland Paris' biggest private stock-holder - created a company called Kingdom Entertainment and purchased 50% of Landmark Entertainment, giving the company a huge infusion of cash. Prince Al-Waleed had 45% and Michael had 5% of the shares. I remind you that Landmark is the famous company directed by Gary Goddard which created the Spider-Man ride at IOA and the Jurassic Park and Terminator 3D attractions at Universal Studios. 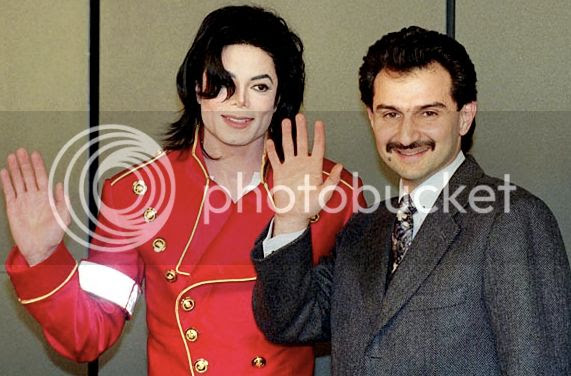 So, what had to happen happened, Michael asked Landmark if they could design a theme park, a real one, not only for him but a park where anybody could go, just like Disneyland. And this theme park would have been named Peter Pan's Neverland! Here is a bird's eye view of the park - please double-click on the image below to see it in big size. 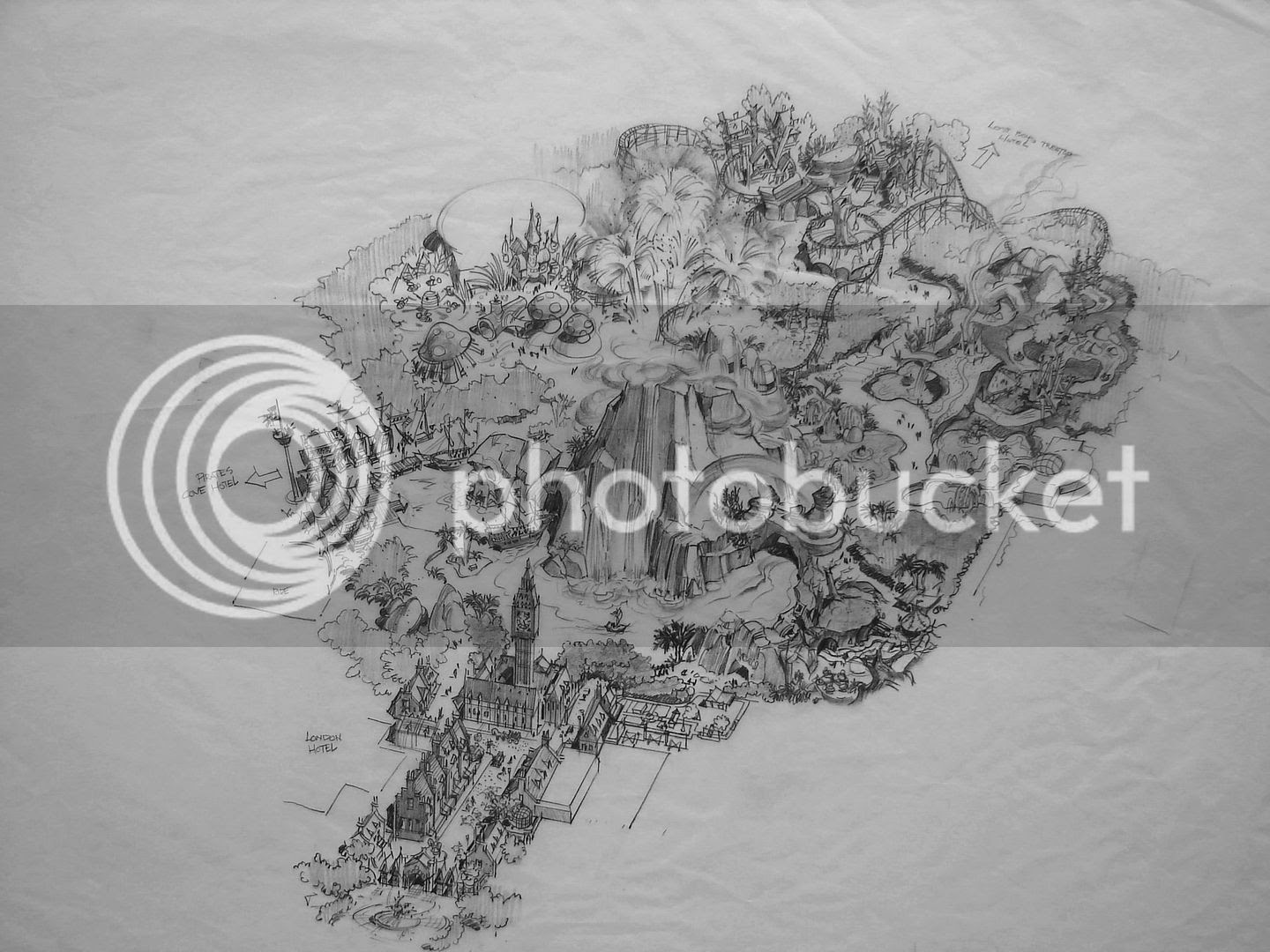 This first concept is amazing, isn't it? Fully inspired from Peter Pan's story, the park would have started with a grand London entrance, as you can see on the artwork below.

A replica of Kensington Gardens, where anyone can see the famous Peter Pan statue, as well as Big Ben and the House of Parliaments in the background, not to mention horse guards at the entrance, all of which would have set a stunning replica of the Victorian city. 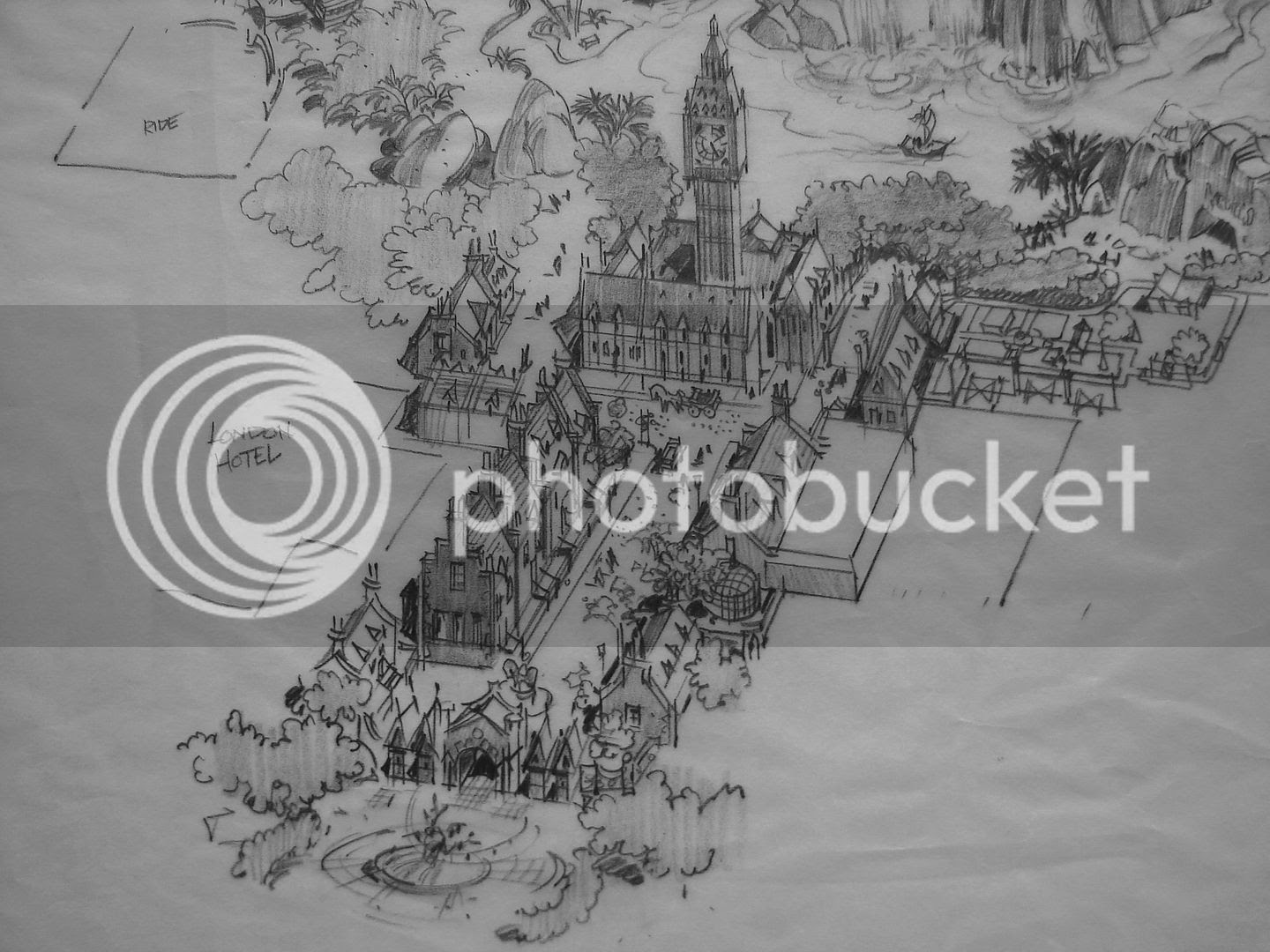 Here is another artwork showing this entrance by Greg Pro. 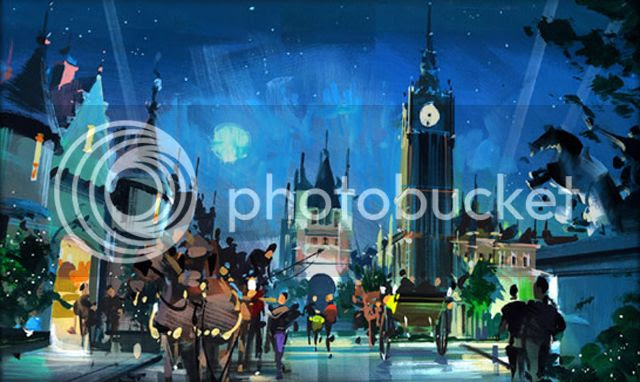 From that point guests were supposed to go to Neverland Island, and Landmark designers had designed two different way to go there, both of which were attractions. The first one, which would definitely have been an E-Ticket attraction, was... to fly to Neverland! As you can see on the artwork below, the take-of was over London, with a fly over Big Ben and other famous London landmarks like the Tower Bridge (note that on the artwork Big Ben and the Tower Bridge are close together but two miles separate them in reality) and then, lead by Tinkerbell, they would fly all over Neverland, the Mermaid Lagoon and Skull Rock and finally land near the Lost Boys home and woods. 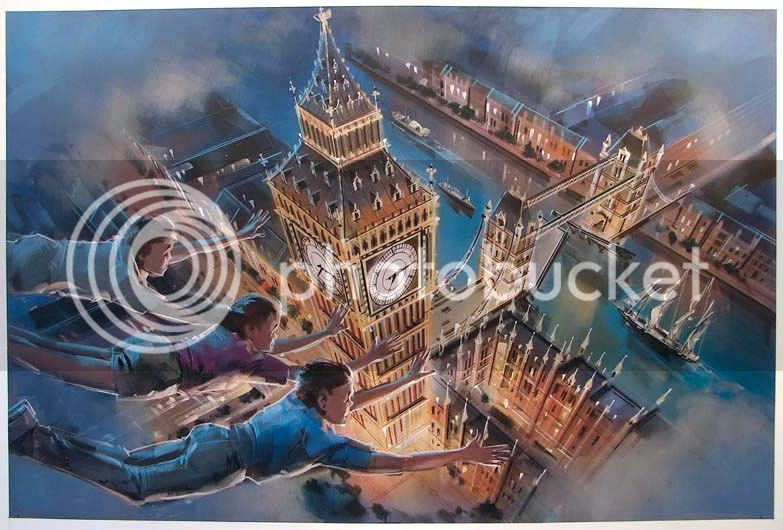 And how would Landmark have achieved this wonder, you ask? First, no, the ride was not designed like Soarin' over California - which, by the way, was not built at that time. Instead, guests would have sat on a platform which would have turned down on a 50 degrees angle, a bit less than on the "flying" coasters, and the movie would have been projected on a huge Omnimax dome located under the platform, giving to the guests the illusion of flying over London and Neverland! What a great ride it would have been!

The other way to reach Neverland would have been by boat. During this short boat ride the boat would have go through mysterious caves before arriving to Neverland Island with its lush vegetation and waterfalls.

Once at Neverland, guests would have had the choice of six different areas:

"Lost Boys area" would have been a fun play area for young kids with slides, jumping fountains, a tree house but also a great roller-coaster with tracks going all over the land. 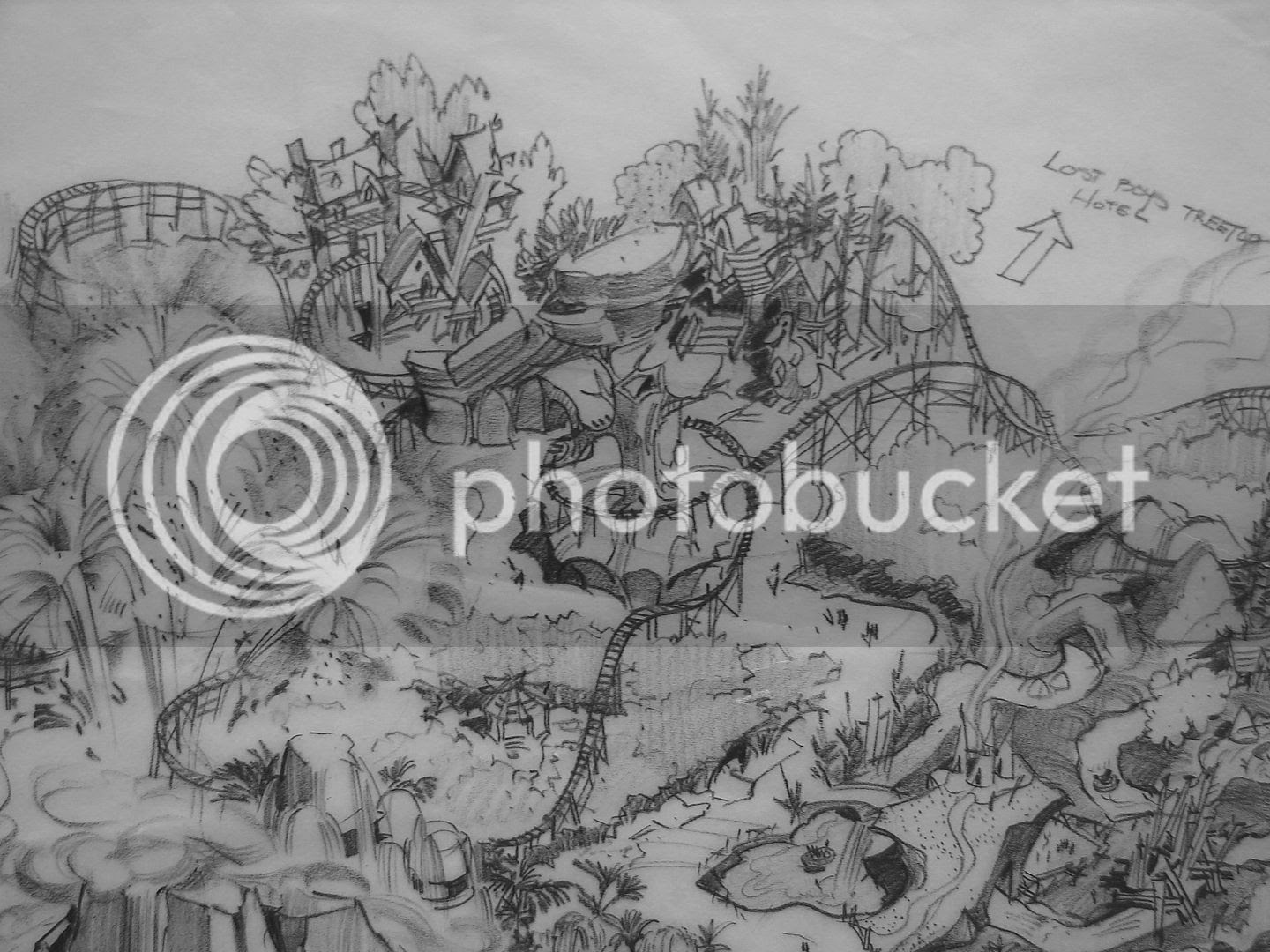 In "Mermaid Lagoon" guests would have had the choice between a boat ride going through Neverland Island caves or to enjoy a meal at a beautiful restaurant located underground with a huge window looking towards the lagoon where a Mermaid show was envisioned. Close to Mermaid Lagoon, the "Indian Village" would have been another area of Neverland where a raft ride was envisioned. 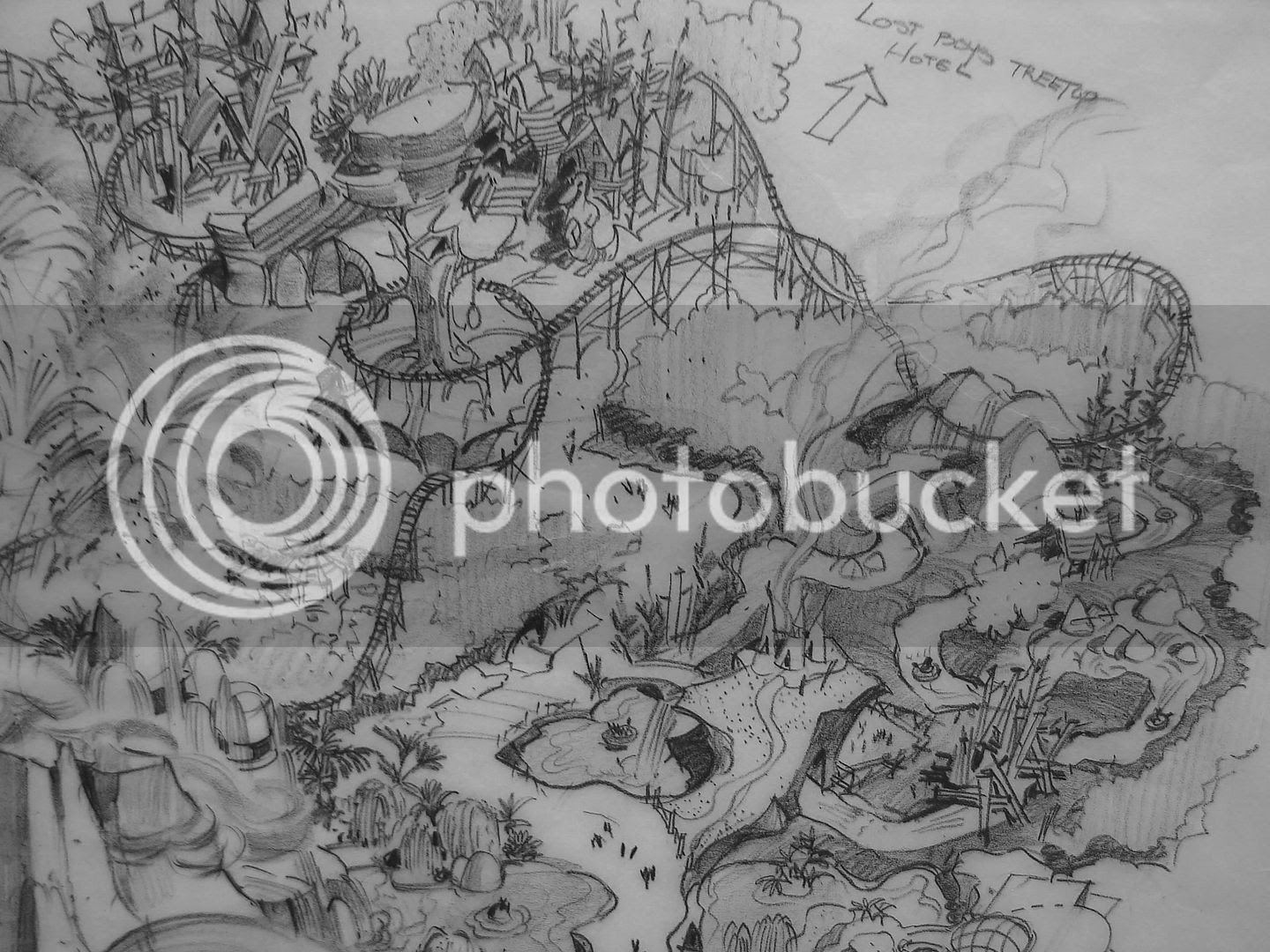 On the other side of the huge Neverland rock, guests would have find "Pixie Kingdom", a great area for young children with giant mushrooms playground and re-themed carnival rides. 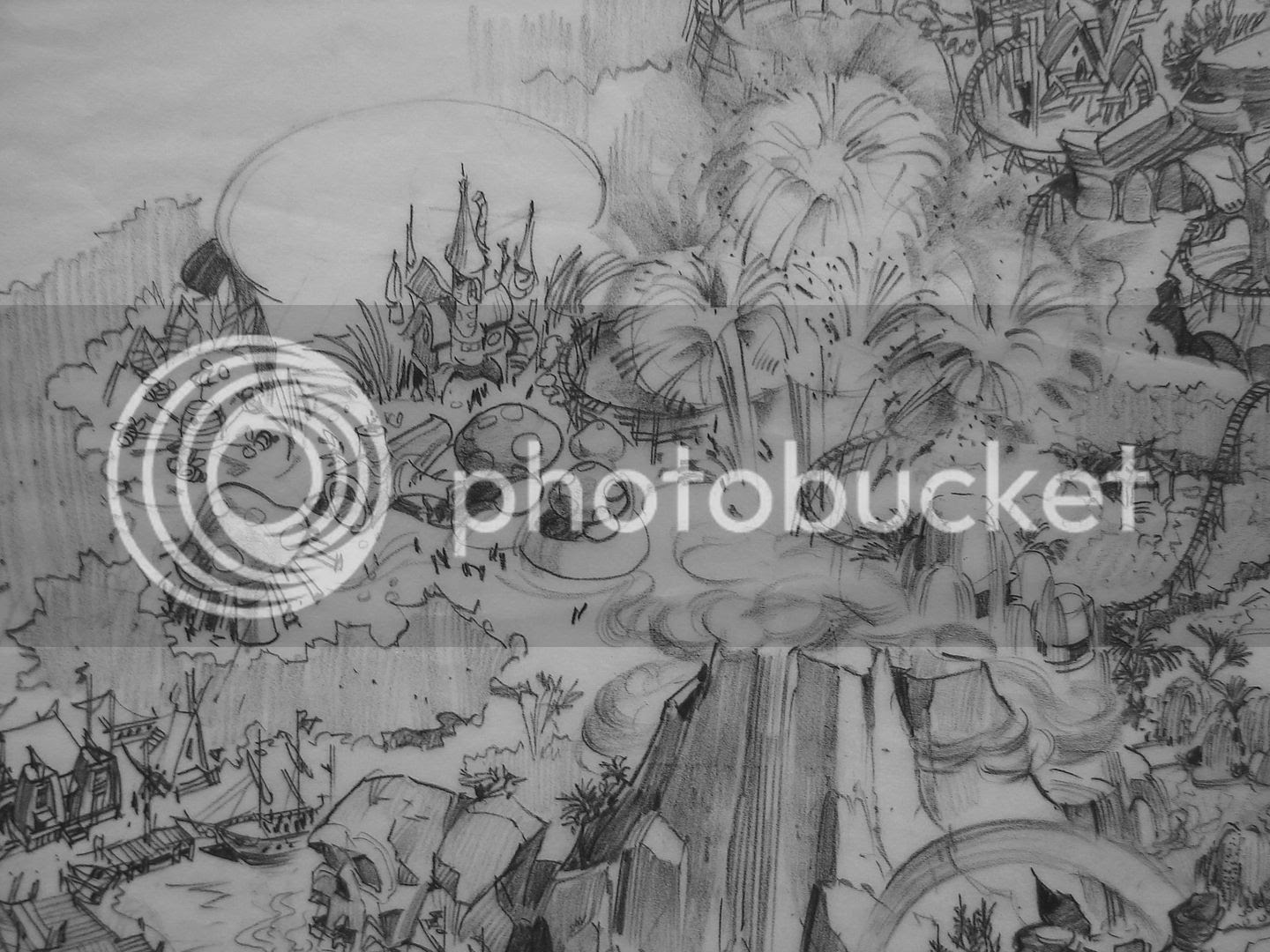 Another major area - not so far from Pixie Kingdom - would have been the Pirates village with Skull Rock nearby as well as Captain Hook's ship. 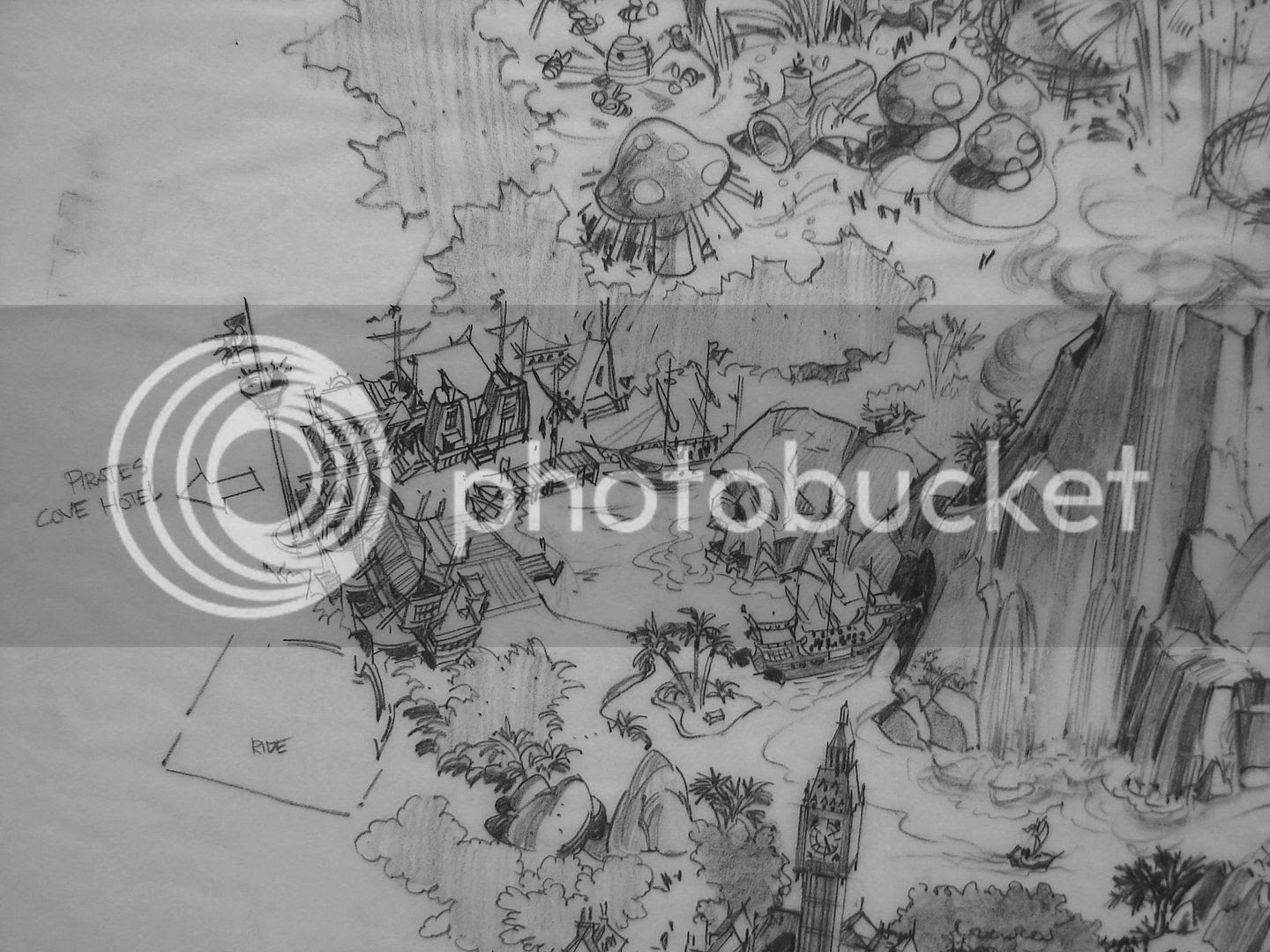 It's there where guests could have watch a great live action show, including a flying Peter Pan fighting his eternal ennemy, Captain Hook. And of course the Crocodile was part of the show. 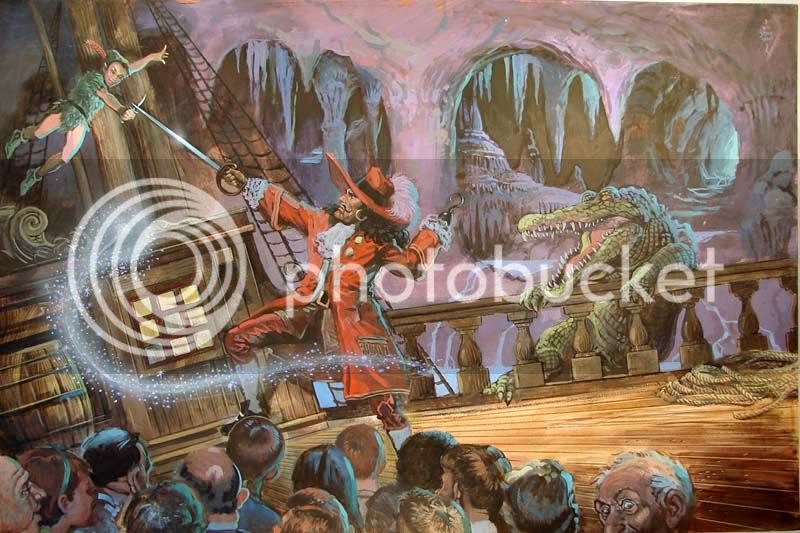 You may also have noticed that in this first concept three hotels were envisioned: a London hotel, a "Pirate's Cove" hotel and a "Lost Boys Tree top" Hotel. As we will see now, the project had significant changes in its final version.

This next document below is another map of the Peter Pan's Neverland park, actually it's the conceptual master plan. Drawn May 24, 1999 at a scale of 1" = 60' it shows a more advanced project with new attractions and also backstage facilities. Let's have a look again at the whole park to see the differences with the first concept. 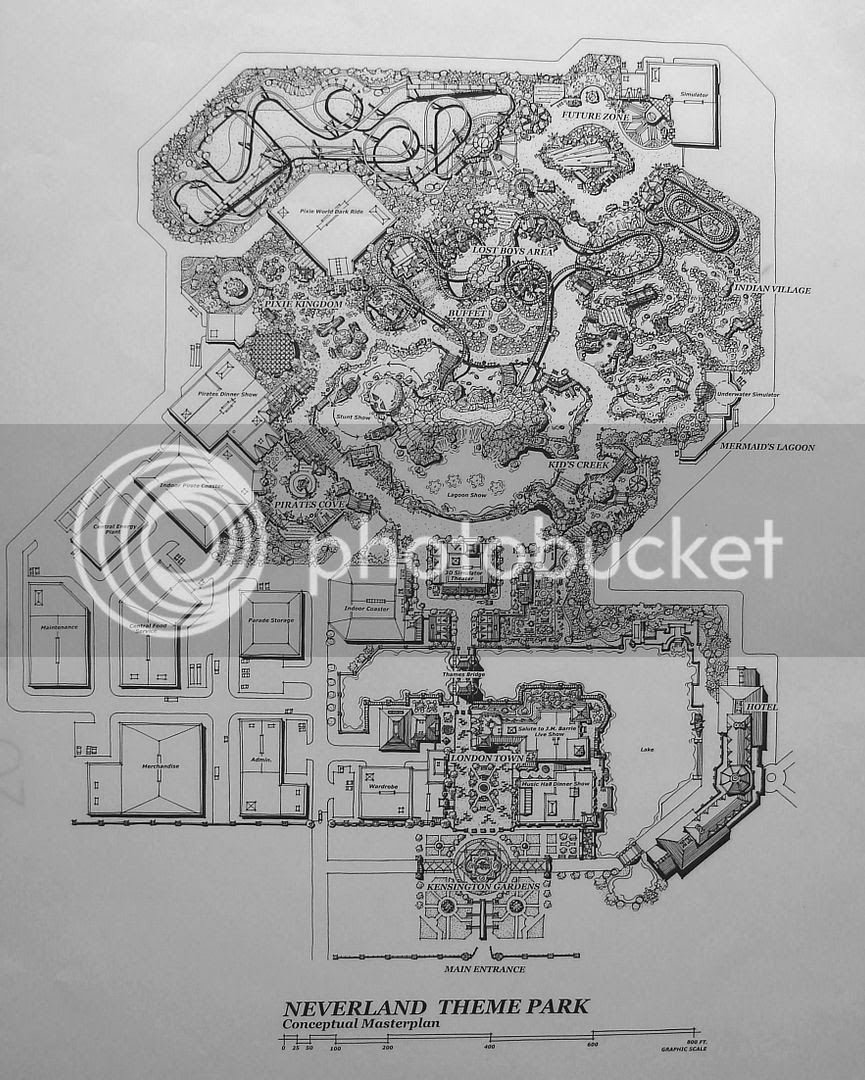 First, the three hotels are gone, instead we have one big hotel facing the lake of the London Town area. Located near the entrance, a bit like the Disneyland Paris Hotel it would have allowed the hotel guests to have a unique view on the Neverland park.

In the London Town area, always located at the entrance, Big Ben is still there, but a replica of London's famous Tower Bridge was added. Also, a bigger Kensington Gardens at the entrance and a music hall dinner show in one of the main building on the right.
Inside the House of Parliament replica, a new show: "Salute to J.M Barrie", the creator of Peter Pan. Right on the other side of the Tower Bridge an indoor coaster as well as a 3D simulator theater were also envisioned. 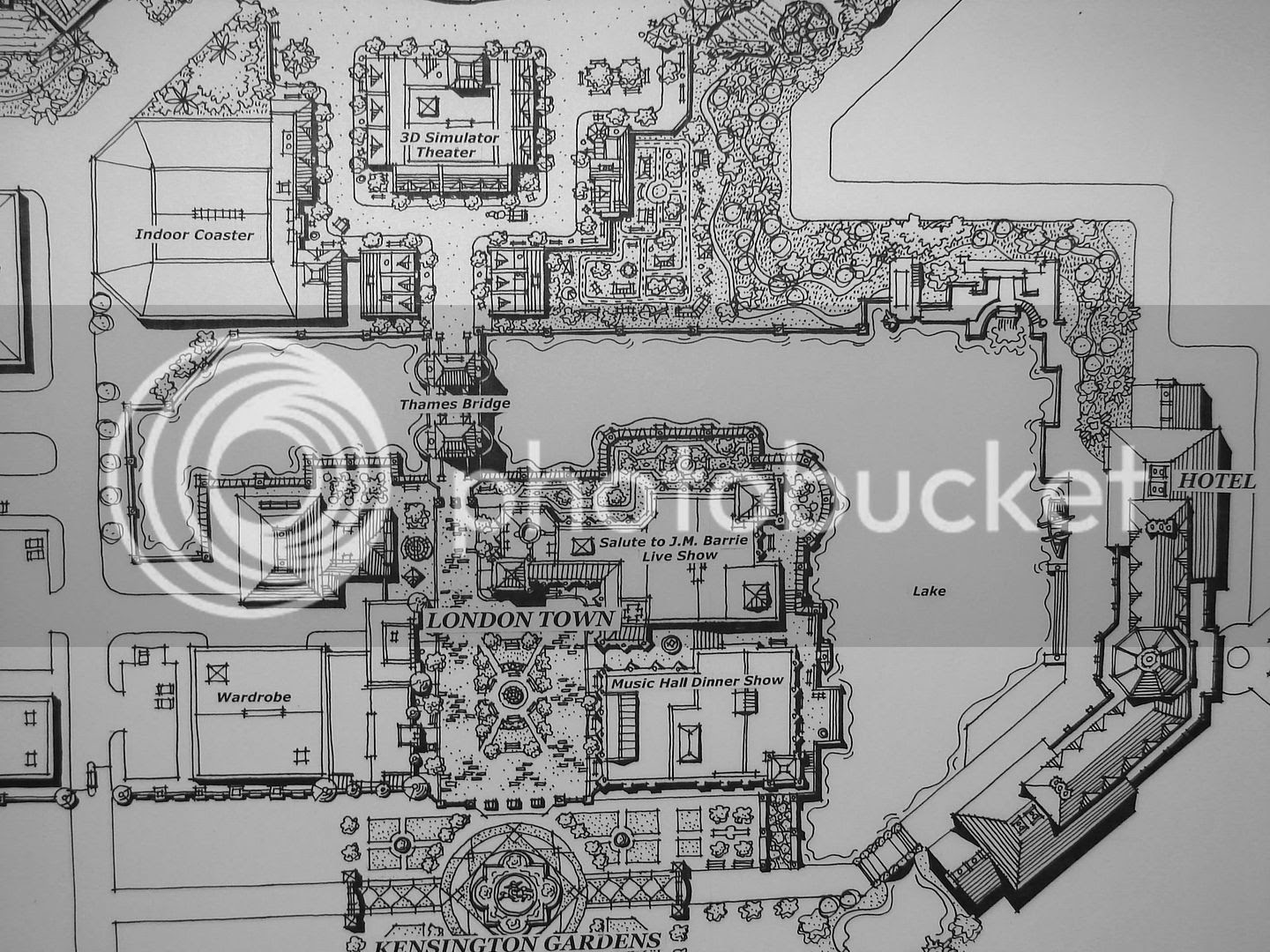 In Pirate's Cove a Pirates Dinner show, another indoor roller coaster and a Pirates stunt show in front of Skull Rock were added. Also envisioned, a lagoon show, probably in the evening. 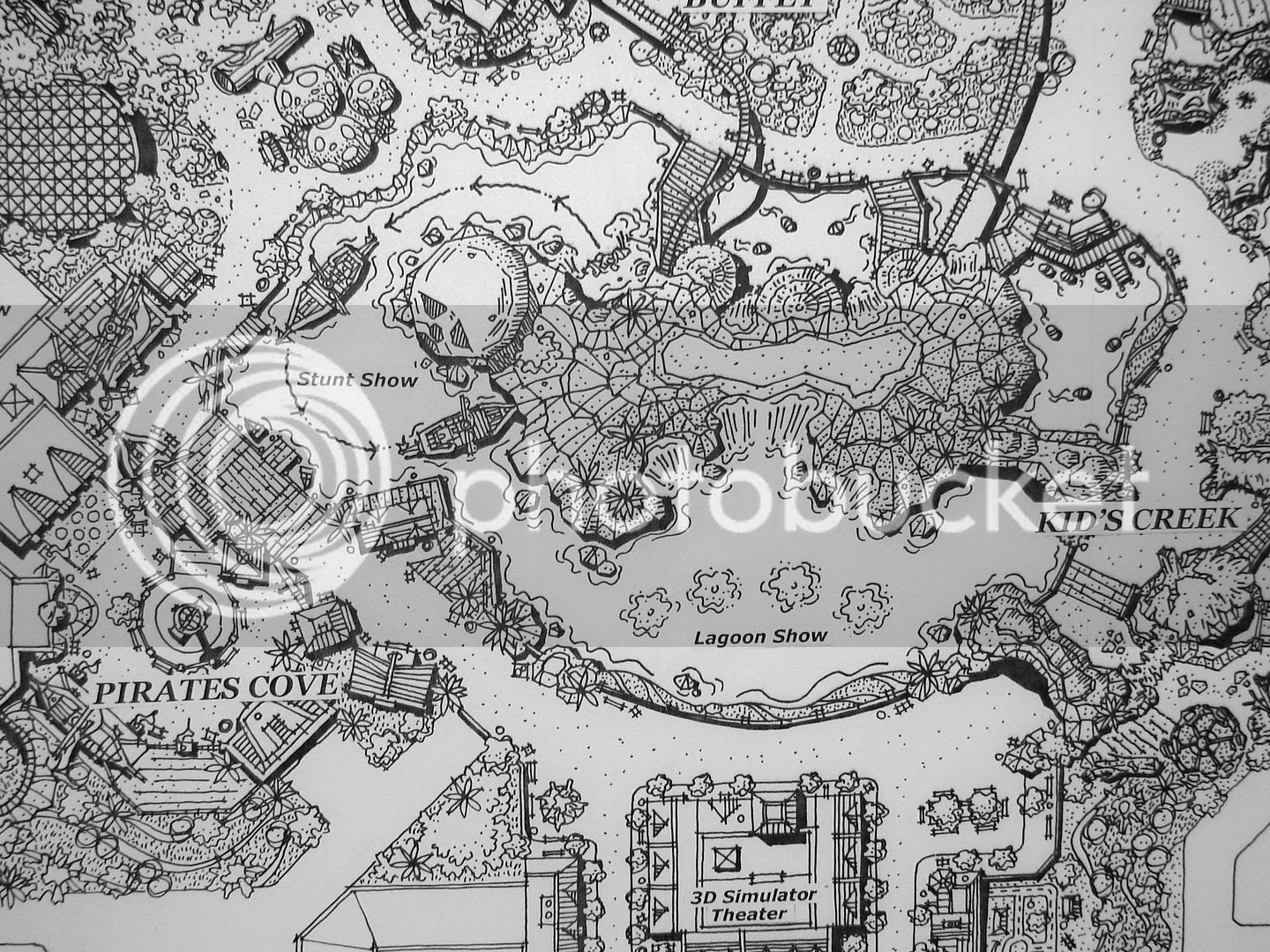 In Pixie Kingdom, the main difference with the first concept is a big building for a Pixie World dark ride. On the top of the picture below, what seems to be a inverted roller coaster would have had its entrance in a new land "Future Zone". 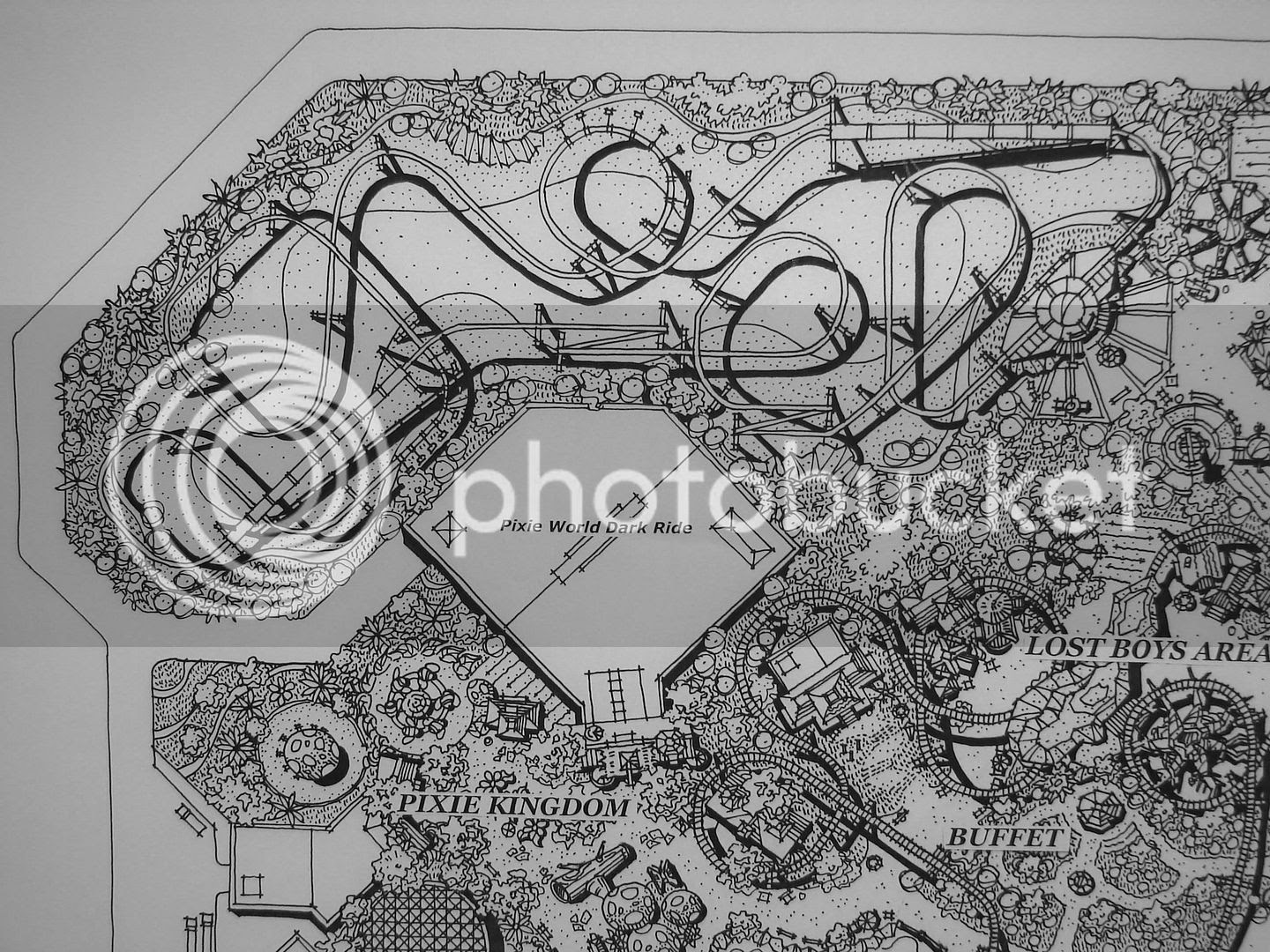 Lost Boys area always have its roller coaster running all over the land and even inside Neverland mountain, and as you can see below, Future Zone was located at the top with not only the inverted roller coaster but also a smaller coaster and a simulator ride. 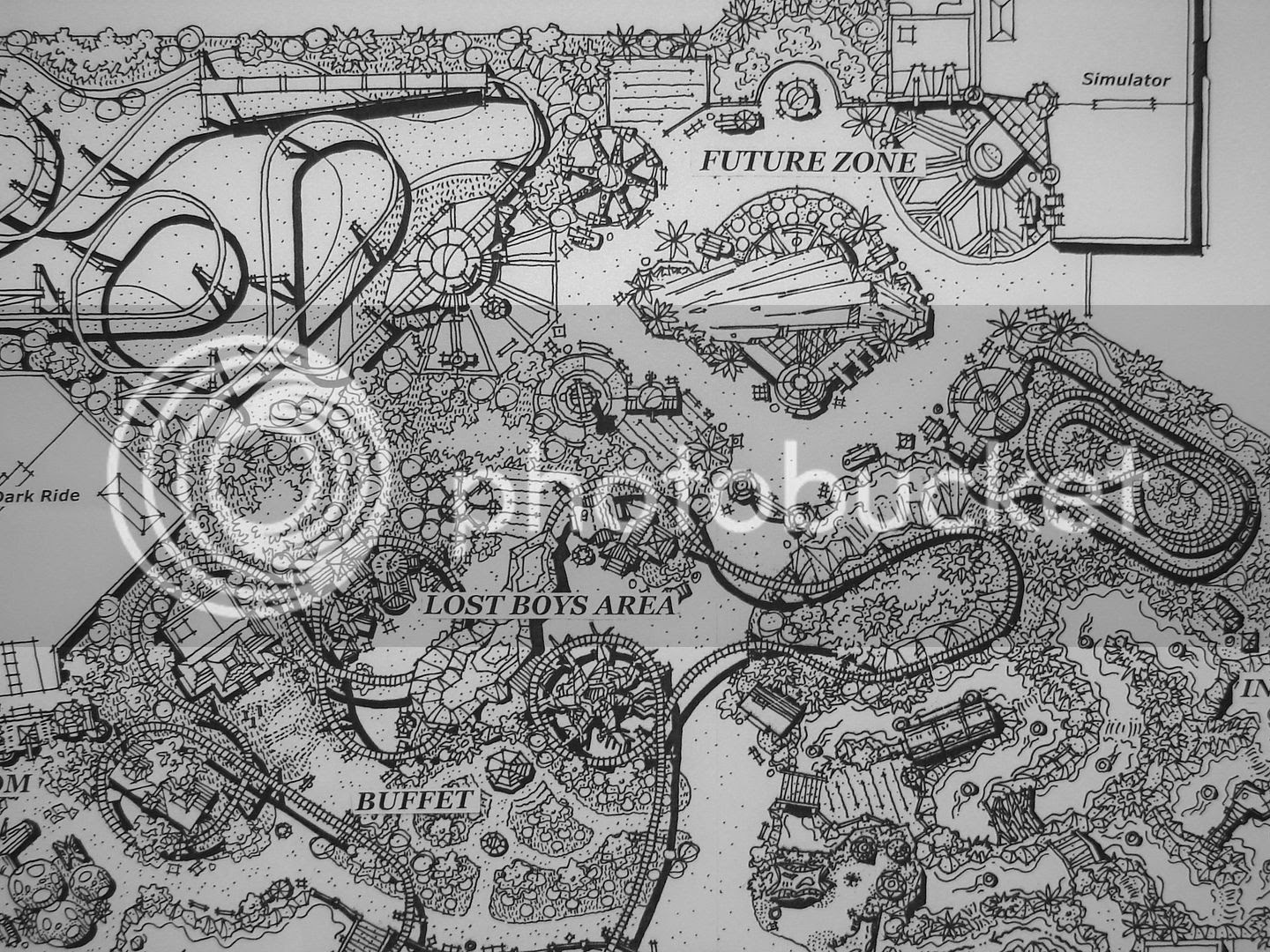 In Mermaid's Lagoon, an underwater simulator was added to the first concept and a new area - Kid's Creek - was designed for young children with playground and water fun including small boats. 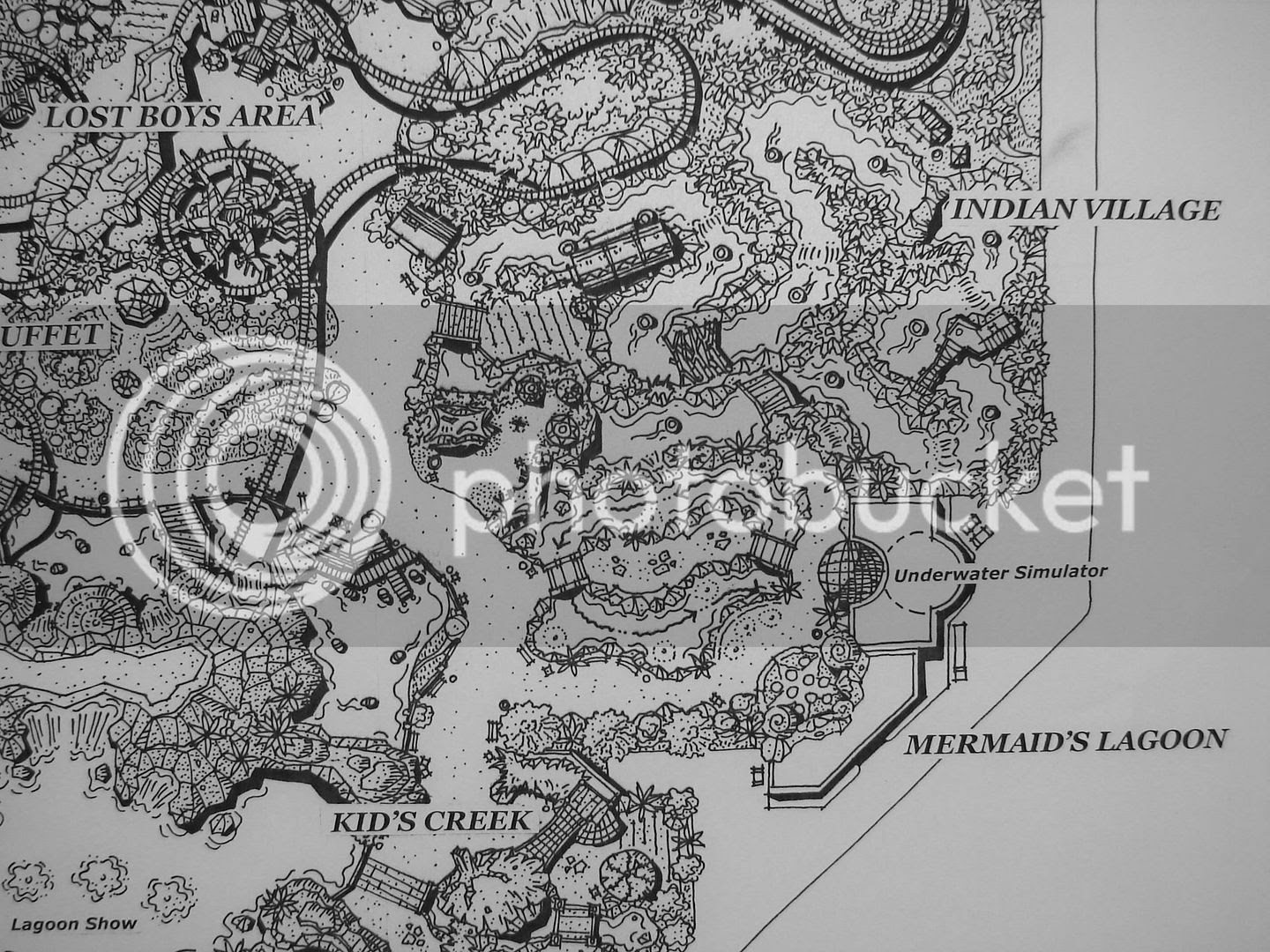 Peter Pan's Neverland was not designed to be as big as Disneyland, but it certainly would have been a great theme park where all the "Peter Pans" living on this planet would have rush!

Does this mean that we will never see this great park concept become real one day? Who knows, with all the different Michael Jackson celebrations that will happen in years to come - not to mention that Neverland Ranch could become for Michael Jackson's fans what Graceland is to Presley's fans - maybe somebody who has enough money will find, just like we do, that it would be great to build this Peter Pan's Neverland for real? And, hey, there is plenty of land available inside Neverland Ranch. Who could imagine a better place to build Michael's dearest dream?

Please do NOT post these artworks on other web sites or forums without asking permission, thanks.

Many thanks to Gary Goddard for the park's description and to Eric Wong for the pictures. Thanks to Nate Walz for the editing of this article.

Also, I've already let you know about it in a previous article, but i would like to remind you that most of the Landmark Entertainment old artwork is actually put on sale on two sites - but NOT the Neverland park artwork you saw in this article. The first site is the Landmark Selections site and the other one is on EBay.com where they have their own Landmark artwork store.


Edited Nov 7: Here is a rare video of the 1996 press conference where Michael Jackson and Prince Al Waleed announced the creation of their Kingdom Entertainment Co.